The Layout Process and Self-Publishing Decisions

ABC Healthy is near complete.  I have been using a large format scanner to scan my paintings, then I adjust the resolution to 300 dpi in Photoshop which will give them the best resolution for printing.  I then use Photoshop to cut out around the image and place onto a transparent background.  This will make sure there are not any white differences from the scanned paper and the books pages when printing.  A transparent background also allows my text to come close to the image. After my images are ready I put them in Adobe's InDesign.  InDesign is a great program.  If there is anything that I do not know how to do I watch tutorials online.  I have just about the whole book done, but I question some of my text.  I will keep rereading until I am ready to have several people edit by book and check for spelling or anything that does not flow.

My next step it to decide how I would like to go about self-publishing.  My two printing options are to order about 1,000 books or to use a POD (print on demand) service.  POD sounds great at first, because there are little to no printing costs.  When reading reviews on POD services I become concerned about the quality of a POD print job.  I definitely do not want my book to lack quality.  I am the type of artist who likes all her brushes in a row.
Posted by Julianne Stokes at 2:16 PM No comments:

X is by far the most difficult letter to create for a healthy food.  I am planing on using xigua fruit, which is basically a watermelon.  (I believe it is pronounced zig-u-a) There are different sources that explain xigua fruit in different ways.  It seems as though it is a Chinese watermelon with a darker almost black outside and a more yellowish inside.  Other sources say that xigua is watermelon that dates back to 2000 BCE and over time people had trouble saying xigua so now Americans call it watermelon.  I don't think I will be able to get my hands on the Chinese xigua so I am going to have to paint just a small watermelon, which is another explanation for xigua  I don't feel comfortable painting and promoting a food that I have never had or my audience won't have access to.  There are over 1,200 variates of watermelon in the world.  I am going to try and tie in a little of history with this fruit.
Posted by Julianne Stokes at 4:33 PM No comments:

I am getting myself back on track with the creation of ABC Healthy.  I am nearing the end of the alphabet.  I have finished my W.  W is for watercress.  It is quite amazing what I am learning myself as I create this book.  I never knew watercress was considered an herb!  It is an amazing herb! It has 15 essential vitamins and minerals! Here is a quick view of my watercress work from drawing to watercolor drawing to painting. Enjoy and eat some watercress.  It is good for your brain! 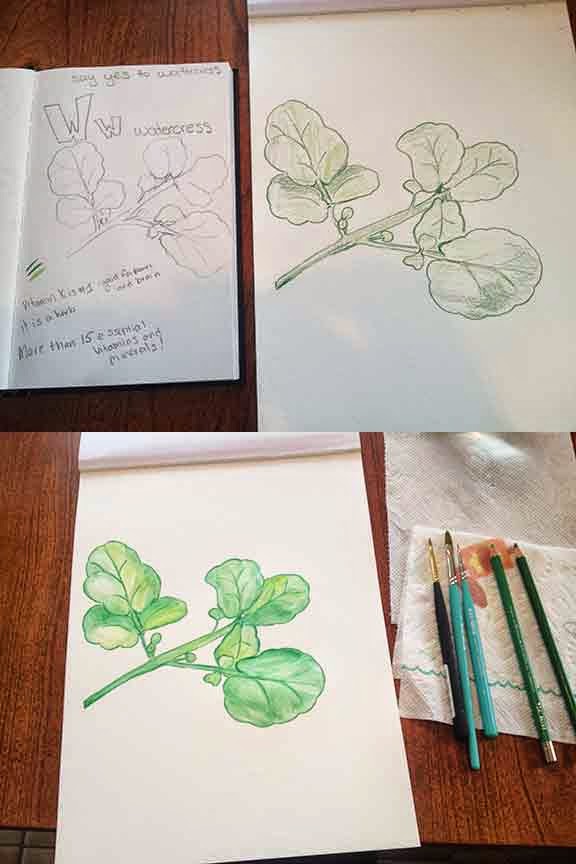 Posted by Julianne Stokes at 1:01 PM No comments:

A Sample of the Process

For my paintings I like to set up the food in an inviting way.  I then create a pencil sketch in my sketch book. Next, I use a 2H pencil on watercolor paper so the marks will be light (not shown). I then use water color pencils for outline and details. Last, I use water, paint brushes, and extra water color paints if needed to complete my painting. This is only the painting process. Scanning and layout will be then next two processes.
Posted by Julianne Stokes at 12:31 PM No comments:

Orange to Zucchini in Four Weeks

So I seem to have gotten behind once again.  I need to give myself a time frame for finishing my paintings.  I have calculated that if I paint three pictures a week for the next four weeks I will have completed my alphabet paintings of healthy food.  Of course after I finish these paintings I will no where be near done.  I will have to review all of my painting and make adjustments.  If I change the text I will need to make new paintings.  I know off the top of my head I want to add some chickpeas in my hummus (letter H).   I have also been thinking of painting each letter.  Letter paintings will be more simple than the healthy food paintings.  The food requires much more detail.

During the next four weeks I would also like to start scanning the paintings on to my computer.  I also need to order a new computer! Then comes layout.  Then comes print and marketing.  I believe I am going to self publish, but that is a whole other topic.

I have a lot to get done in the next four weeks.  From Orange (letter O) to Zucchini (letter Z) and everything in between.  I want to get this ball rolling.
Posted by Julianne Stokes at 11:14 AM No comments:

N is for Nuts, or is it Not

After painting mushrooms for letter M I have decided to to take a look back at my text for ABC Healthy.  As I have mentioned in my previous post I want my book to have a natural feel.  I believe the vision I originally had for the book still exists, but as I paint new ideas come to mind.  I have changed my text and some of my choices for food for different letters while I have been working.  As I move on to letter N I am questioning whether or not I should use nuts.  With all of the peanut and nut allergy concerns will I be criticized for using nuts for my N?  In my family we love nuts.  They are a healthy fat full of protein.  I do respect people with nut allergies.  Am I looking to far into what I will be criticized for?  In order to keep moving forward I am going to paint nuts and decide later.  I have been working in order from A to Z and do not want to break my creative juices.  I can always decide later to change the text and to paint something different for letter N.  For now, "Never leave the house without Nuts the perfect N snack.  They are filled with fiber, protein, and healthy fats." - Julianne Stokes
Posted by Julianne Stokes at 8:05 AM No comments:

It has been a little over a year since my interest in becoming an author and illustrator became a reality.  I have always had the idea in the back of my mind, but it was when I took my son to see a visiting illustrator at the local library that the idea became a possibility.  John Maders displayed a fun energetic love of illustrating.  I thought to myself, "I want that passion!"
And so it began.  I took Manders' recommendation to read Writer's Digest, Children's Writer's and Illustrator's Market. I then did what I have done as an artist in the past and turned to my sketchbook.  Sketchbooks are great because we can write words and draw pictures allowing our minds to flow freely. I want my children's books use words and pictures to express the natural world.
I came up with the idea that we need to have a series of children's books about healthy eating.  My first book is a work in progress.  I am using watercolor to paint healthy food for each letter of the Alphabet.  My book is called ABC Healthy.
Posted by Julianne Stokes at 2:11 PM 1 comment:

Julianne Stokes
Julianne Stokes loved art from a very young age. During her adolescence she took small painting classes at the Long Beach Island Art Foundation in New Jersey. In high school at The Pennington School in New Jersey Julianne pursued photography classes. After high school Julianne went on to study Studio Art at the University of Colorado. To finish her college degree she took teaching art and teaching literature to children classes. This is when she knew she wanted to be involved with children’s art. Julianne Stokes is the author and illustrator of "ABC Healthy" and "Dolphins Don’t Eat Donuts". She believes in living a healthy lifestyle and is looking to encourage parents and children to make healthy choices. When Julianne is not writing and illustrating she enjoys spending time with her family in the mountains of Colorado or at the beach in New Jersey. To find out more about Julianne and her adventures as a writer and illustrator visit her website at jstokesart.com, on Facebook as Julianne Stokes, and on Instagram @jstokesart.